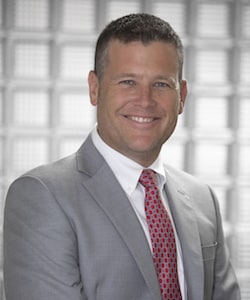 Jonah Wolfson, Esq. was born and raised in Miami, Florida. He attended high school locally and graduated from Boston College in Chestnut Hill, Massachusetts, majoring in English. To earn money in college, Mr. Wolfson worked on a commercial fishing boat in Gloucester, Massachusetts. After graduating from Boston College, he spent time hiking on the Appalachian Trail for roughly five months. After this, he enrolled in law school at Chicago-Kent College of Law. In law school, Mr. Wolfson was an intern at the Cook County Office of the Public Defender where he tried a number of cases to verdict. He also met his wife, Andrea, in Chicago. Returning to Florida, he passed the bar exam during his first sitting and has practiced personal injury law since. He is licensed in the State of Florida and has represented Plaintiffs and Defendants in cases involving wrongful death, car accidents, motorcycles, slip and fall, negligent security, medical malpractice, legal malpractice, and other complex tort scenarios. Prior to dedicating himself to representing Plaintiff’s only, Jonah worked for Valle, Craig, Sioli, and Lynott, PA for over three years, practicing insurance defense litigation. Jonah considers public service a duty. He was elected to the Miami Beach City Commission in 2007. While there, he served at different times as the chair of the Land Use Committee, Finance Committee, Flooding Committee, and the Sustainability Committee. As a commissioner and chairman of “Let Miami Beach Decide”, he successfully fought and defeated a mega development on public land after petition gathering efforts and litigation. On occasion, Jonah will take on the representation of a victim of overdevelopment such as a condo association or resident. Other than that, since 2005, Jonah has represented only Plaintiffs who are victims of others negligence.

Jurisdictions Admitted to Practice Florida, 2001
US District of Southern Florida, 2014

Plaintiff – Client was given a loaner, brakes failed. She suffered scar on forehead. Jury awarded $280,000.

THESE ARE SOME CASES WE HAVE HAD. THERE ARE MORE ON THE RESULTS PAGE.

Jonah & his group of professionals were great & very helpful through this process, very easy to talk to & always there to answer any questions I & my son had. Glad to have had Jonah as my attorney, would definitely recommend him to anyone.

Our case went to trial and I saw Jonah in action in the Courtroom. He was passionate and won our case in front of the jury.

Contact Us
Practice Areas
Client Reviews
★★★★★
"All I can say is WOW! I have never met such a professional law team. They are caring and put your needs above money. I guess to describe them is fair, kind, and professional. Don't be fooled by the other attorneys who only want your money. By far the best attorneys in Florida!" Marina B.
★★★★★
"I absolutely love this firm! It's personalized, you always have someone on the phone and you literally feel like family. They were always on top of my case and I felt supported the whole time my case was being settle. I got what I need it and what I deserved! Totally recommend them! They are the good attorneys for real!" Dora
★★★★★
"Wolfson & Leon took my case and did everything they said they were going to do followed up with me to let me know what was going on and were very professional and were able to win me a larger settlement then I anticipated. I give them five stars for excellent representation." Russ
View More
Submit a Law Firm Client Review